From the moment you woke up this morning, chances are you’ve been relying on electricity every second. It powered the alarm clock that got you out of bed, it kept the milk in your coffee from spoiling overnight, and it powers the device you’re using to read this feature story right now. But for too many communities around the world, reliable electricity remains frustratingly elusive.

Solomon Islands provides an example of the developmental challenges faced due to a lack of electricity. Without power, fishers have nowhere to safely refrigerate their day’s catch, stifling the development of a potentially lucrative industry. Students are left literally in the dark, unable to study at night. And doctors don’t have electricity to power the lights in health clinics and hospitals, vital cold storage, and life-saving ventilators.

Many children in Solomon Islands are cut off from better education opportunities and the transformative experience of being connected to the rest of the world through reliable power. Photo: Robert Taupongi / World Bank

In Solomon Islands, only 16% of households are connected to the electrical grid. The low level of electrification in Solomon Islands is due to systemic, economic, and geographic barriers to expanding the grid. A low population density and urbanization rate, combined with geographic remoteness and the logistical challenges of expanding grid infrastructure in an island country, result in high costs for initial development. Further complicating matters, in 2016 only 60 licensed electricians lived in the country and all resided in the capital, Honiara.

While the World Bank has invested significantly in sustainable energy programs in Solomon Islands, particularly in hydropower and clean energy access, many challenges still remain. Those in Honiara and in other key urban centres like Auki and Gizo can plug into the grid and connect to the modern global economy, communities in most other islands are left behind, often exacerbating socioeconomic tensions on the urban-rural divide. In a country as geographically dispersed as Solomon Islands, even urban areas struggle to keep up.

One innovative solution championed by the World Bank Group through the Global Partnership for Results-Based Approaches (GPRBA) is the use of results-based financing (RBF) to fund development projects. By tying disbursement of funds to actual results, local partners are both incentivized to meet specific goals and given flexibility on how to meet them. Starting in 2016, GPRBA partnered with Solomon Islands’ state-owned power utility, Solomon Power, to increase access to reliable electricity through an RBF project. Funded by the Australian Department of Foreign Affairs and Trade, this successful project serves as a blueprint for similar development projects in the region.

The RBF approach for energy access fit the challenge of electrifying Solomon Islands for several reasons. Initial high upfront costs created significant affordability challenges for people in Solomon Islands. Based on an initial World Bank assessment, the willingness to pay for electricity was quite evident. The high cost of the initial connection, however, was an insurmountable financial barrier for most families. The infusion of capital and aggregation of demand by clusters allowed Solomon Power to use economies of scale to negotiate lower costs for supplies and labor and overcome that challenge.

An example of a new power connection with a power meter and LED lightbulb. Photo: Charis Lypiridis/World Bank

Additionally, by focusing on the result—in this case, the number of new households connected to the grid—the people in the communities engaged in this program had the flexibility to determine how best to tackle a diverse array of scenarios and complications.

No one grid connection is the same in Solomon Islands. Some required auxiliary poles to reach homes tucked deep in the bush. As the project got underway, community feedback informed a strategic restructuring of the project to include connections to schools, health clinics, and other community structures.

Community outreach and creating space for feedback are critical components of any RBF program. The buy-in from Solomon Islanders was crucial to this project’s success. Photo: Charis Lypiridis/World Bank

What’s Next for Solomon Islands and RBF

Four years after the start of GPRBA’s project with Solomon Power, over 15,000 people have new or improved connections to electricity. In-home refrigeration and new power connections at health clinics are boosting the health and resiliency of rural communities. Women can power their own businesses, improving their financial independence. Children can now study at night and are connected to each other and the world through the internet.

Micro-enterprises like this canteen are common in Solomon Islands. Now eligible for subsidized power connections, these businesses can operate at night and refrigerate goods, strengthening the local economy. Photo: Charis Lypiridis/World Bank

Perhaps most encouraging, the success of this project is spurring adoption of RBF components in much larger energy projects in Solomon Islands. The Electricity Access and Renewable Energy Expansion project is investing nearly ten times as much as GPRBA in new grid connections in low-income areas. Additionally, Solomon Power has incorporated an RBF component into their connection drive. This ensures the transformative work of providing access to reliable power for households, schools, health centers and micro-enterprises will go on.

Innovative approaches like RBF are advancing global development and Solomon Islands is just the beginning. Its success proves just how much can change when an idea—or a lightbulb—flicks on. 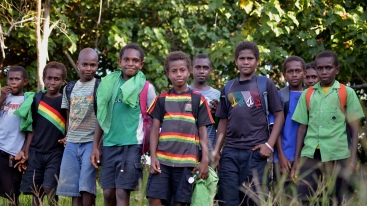