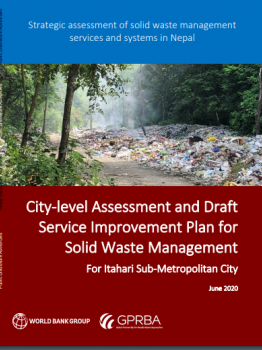 By 2050, it is estimated that nearly half the world’s population will reside in cities. Bulging population in cities coupled with their rising income levels has led to an increase in the amount of waste generated by these urban centers. Cities and towns across the globe today face acute challenges in managing their waste in terms of its efficient collection, transportation and scientific disposal. Moreover, they need to comply with the prevalent environment standards and negate any adverse impact on general public health and environment.

A developing country such as Nepal is no different in facing these challenges. In 2015, Nepal established a three-tier government while adopting the new constitution. Local levels have become an equally strong tier of the government as compared with provincial and federal government. Among its other functions, the local level is also responsible for managing municipal waste generated within its jurisdiction. Nepal generates 7 lakh metric ton (MT) of waste per annum of which only half is collected. All the collected waste is disposed without any treatment. Of the 293 urban local levels (out of total 753 local levels), only few cities have developed a sanitary landfill to dispose the collected waste scientifically.

Systematic improvement of solid waste management service delivery through a pilot program was attempted with support under Global Partnership for Output-based Aid (GPOBA) in 2013, covering five cities of Nepal. Taking the approach of performance-linked grant support to these cities yielded successful achievement of targeted outcomes in service delivery and financial sustainability.