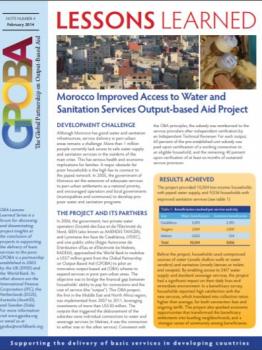 Despite Morocco's having a generally good infrastructure for the delivery of water and sanitation, over 1 million residents in the fast-growing outskirts of cities lack adequate services, posing a significant health and environmental problem and keeping people in unproductive and inefficient daily routines that required the manual transport of water.

The government's directive in 2005 to make the provison of water and sanitation services to these informal settlements set in motion a collaboration between private operators in the country, local municipalities, and GPOBA. This US$7 million grant would be the first OBA project in the Middle East and North Africa region, and leveraged investments of over US$30 million during its implementation from 2007 to 2011. Approximately 52,000 residents received improved access to sanitition services (9,000 households) and piped water supply (10,500 households).

This Lessons Learned discusses project insights gathered at the end of this project.