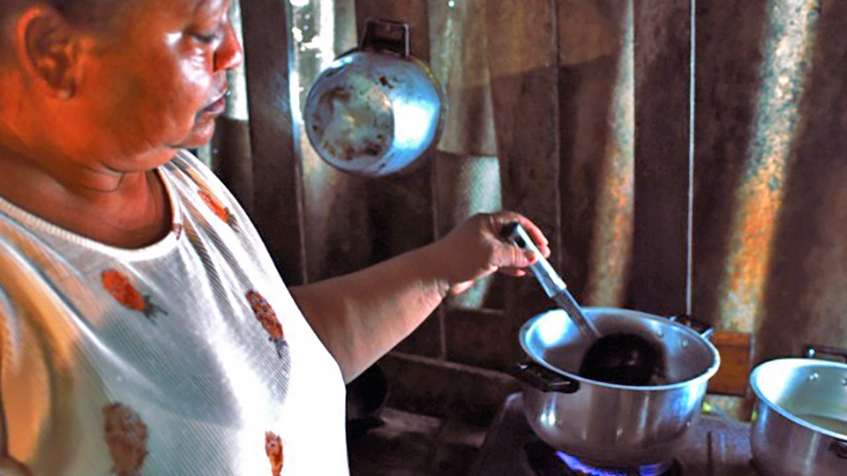 For Yarlis Miranda, a young woman living in the village of Repelón in Colombia’s Caribbean coastal area, cooking for her husband and six children used to be a heavy burden.
“When I came to live here, I had to cook with firewood on the ground, which was very uncomfortable,” says Yarlis. “It was especially difficult when I was pregnant as I had to set up the stove on the floor to cook.”
Yarlis explains how her eyes became infected many times by the smoke, and her two-year-old daughter had to be treated for an allergic reaction to the smoke.

An alternative to firewood is natural gas which is plentiful in Colombia and safer, less expensive, and less environmentally damaging than other fuels typically used for cooking. Although the government has introduced consumption subsidies to make natural gas affordable for poor customers, many still rely on dangerous and less efficient energy sources. The reason is the high cost of switching to gas – a connection cost of more than US$370 per household.  To help low-income families realize the benefits of natural gas, the Global Partnership on Output-Based Aid (GPOBA), a global program administered by the World Bank, joined forces with Fundación Promigas, a charitable foundation created by the Colombian gas transmission and distribution company, Promigas.

Together, they developed a project to bring new natural gas connections to up to 35,000 poor
households in Colombia’s Caribbean coastal and south west regions. GPOBA supported the project through a US$5.1 million grant, drawing on funds from two of its donors: the International Finance Corporation and the UK’s Department for International Development (DFID).

“The situation in Colombia, with families unable to afford connection fees but able to pay monthly gas service bills, was well suited to the one-time use of output-based subsidies,” explains Cledan Mandri-Perrott, World Bank task manager for the project.

The GPOBA project provided a connection subsidy of US$141 per household, equivalent to about 38 percent of the connection cost.

As many households could not pay the remaining US$229 cost per connection straightaway, the regional distribution companies provided financing over a six-year period.

“The GPOBA subsidy was designed to make each connection economically feasible while still requiring beneficiary families to make a financial contribution,” says Cledan Mandri-Perrott. “Getting the subsidy level right was critical to ensuring the GPOBA funds reached more families, and encouraged a sense of ownership among beneficiaries.”

Under the output-based approach used in the project, payment of the GPOBA subsidy was linked to the following pre-agreed services or “outputs”:

Project results
The project served as a pilot program, demonstrating a model that regional gas distribution companies can replicate throughout Colombia to speed access to piped natural gas for poor households. At closing in July 2008, the project had installed natural gas connections and gas stoves, and provided at least three months’ billed service, for a total of 34,142 poor households. The switch to natural gas for cooking purposes enabled the participating families to make significant savings in household expenses. It also made cooking safer and cleaner.
“The most important impacts we’ve seen have been in healthcare,” says Aquiles Mercado, noting that extending natural gas connections to more families could help the government save money spent on treating respiratory infections.
For Yarlis Miranda and her family, the natural gas connection has reduced their energy bills and improved their living conditions. As Yarlis puts it: “All of my pots and pans are clean now. It’s fantastic!”