Ethiopia: Dealing with the “Last Mile” Paradox in Rural Electrification 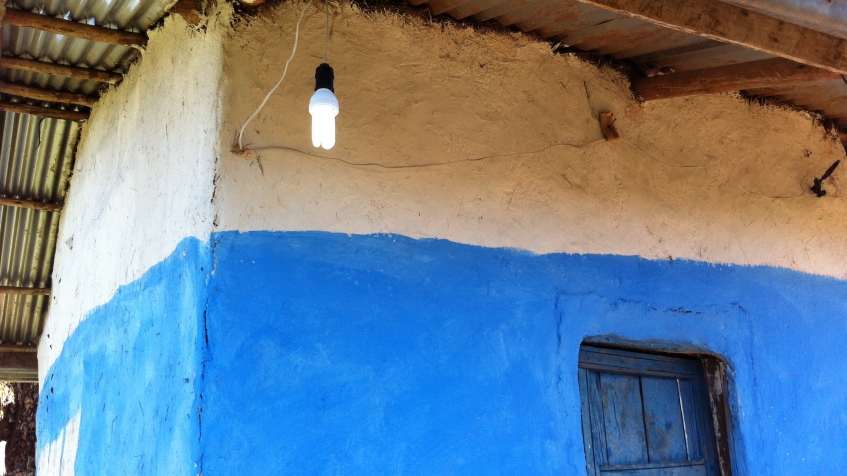 Here’s a conundrum: many poor households don’t have access to basic infrastructure services, such as energy or water and sanitation, even though:

a) The infrastructure has been installed in their communities – often close to their homes;
b) The cost of connecting them to the network represents only a small fraction of the utility’s total investment; and,
c) These households can afford to pay for the services once they are connected, and may in fact be paying more for alternative services that are less reliable.

Luiz Maurer, a Senior Energy Specialist in the World Bank’s Africa Region, has seen this situation firsthand in the rural electrification sector in Ethiopia. It’s known as the “last mile” paradox.

“Ethiopia has a competent public utility, with a mandate to increase the number of rural towns and villages with electricity access; and government and donor support for the rural electrification program, including through IDA,” Luiz explains.

“But a few years ago, when we visited some towns and villages that had been electrified for 18 months, we were shocked to see that the program had not gone the ‘last mile’ to ensure that households were actually connected to the grid.”

Luiz saw that many poor households are paying more for alternative fuels, such as kerosene, than they would for metered grid-based electricity.

Some families obtain electricity by stringing wires to their nearest neighbors, who then charge them on a per lamp basis, which means they end up paying about ten times the lifeline rate charged by the utility.

Connection cost
For poor households, the barrier to access is the cost of connection, which at an average of US$75 can represent up to 15 percent of their annual income.

For the utility, the Ethiopian Electric Power Corporation (EEPCo), the connection cost represents only 3 percent of its upstream investment. But EEPCo cannot finance this cost because, according to the regulatory compact, its responsibility stops at the meter.

A few years ago, EEPCo tried to help poor households pay the connection cost by providing them with microcredit, and the pace of electrification accelerated.

“The problem was that the concession of these loans consumed considerable amounts of the utility’s working capital, which needed to be channeled to the backbone of the rural electrification program,” Luiz explains.

Grant funding
In October 2008, the Global Partnership on Output-Based Aid (GPOBA) signed a grant agreement with EEPCo for a scheme to deal with the last mile paradox and to make the connection cost affordable for poor rural households.

The GPOBA project was originally designed as part of the World Bank’s Second Electricity Access Rural Expansion Project (EAREP II), which benefits from a US$130 million IDA loan.

Within this framework, GPOBA is providing a US$8 million grant, which will enable EEPCo to connect and provide loans to 229,000 households, representing a population of 1.1 million people.

“While the GPOBA grant is small compared to the IDA loan, we expect it to have a big impact on the access rate in rural areas and to provide a model for future electrification projects,” says S. Vijay Iyer, Sector Manager for Energy in the World Bank’s Africa Region.

A different business model
The project uses an output-based aid (OBA) approach. GPOBA pays a subsidy to EEPCo only after independent verification of pre-agreed “outputs”:

"The GPOBA grant was an ‘easy sell’ as it offered EEPCo a different business model through which the utility would be properly compensated for providing the loans," comments Carmen Nonay, GPOBA Senior Infrastructure Specialist.

The energy efficiency component of the project also helps the customers, as using CFLs can lower their electricity bill by 55 percent.

The project became effective in May 2009. It has potential for scaling up, for instance by using future IDA funds to top up the GPOBA resources. 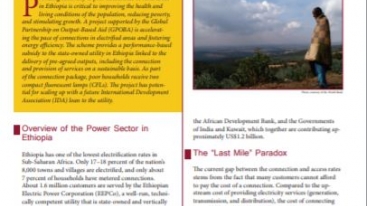 Output-Based Aid in Ethiopia: Dealing with the “Last Mile” Paradox in Rural Electrification