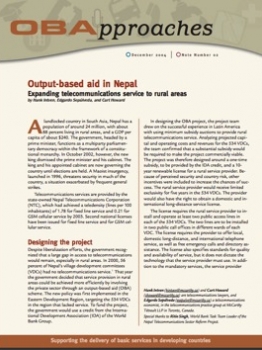 A landlocked country which is covered largely by hills and mountains, Nepal is one of the poorest countries in the world, where many people are isolated and without formal means of communication. Despite recent telecommunication sector reforms, rural areas have not been served. Recognizing this, the Government of Nepal, with the assistance of the World Bank, has developed an initiative whereby the private sector would provide telecommunications services to certain rural districts.

To make the project commercially viable, a one-time subsidy financed by an IDA credit was granted with the 10-year renewable license. The subsidy would be paid based on outputs delivered - i.e., network roll-out. The result has been one the first output-based aid (OBA) projects for telecommunications in which the World Bank has funded the subsidy. Furthermore, the project has made progress toward simulating market conditions despite a very risky political and regulatory environment. This has demonstrated that OBA projects can be developed in difficult conditions, and that output-based assistance may be one solution for delivering basic services to the poor in the poorest countries. 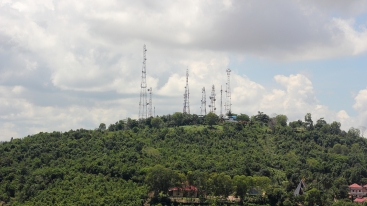