Challenges in Formalizing the Supply of Electricity in Mumbai’s Slums 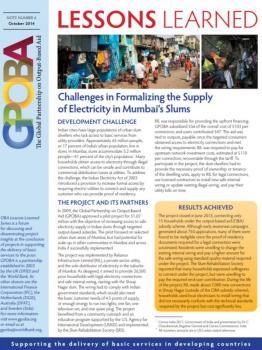 By the project's closing in June 2013, the connections achieved through the OBA subsidy fell far short of its goal; however, there were lessons that provided valuable insight into the future design of OBA projects when dealing with potential consumers in areas still reluctant to switch from illegal to legal connections, particularly in light of social pressures from groups whose illicit revenues were threatened.  Although over 750 applications were received, the vast majority were deemed ineligible due to lack of the necessary residency documentation. Nonetheless, Reliance Infrastructure Limited still achieved about 7,000 new connections, albeit outside of the OBA scheme.

This Lessons Learned discusses project insights gathered at the end of this project.